If you’ve ever tried coordinating an event with your youth ministry, let alone coordinating church-wide events, then you know how much it can feel like herding cats.

With youth groups, you’re trying to communicate with younger students who don’t drive and rely on parents for rides to church events and with older students who drive themselves but are balancing their youth group activities with a number of other after-school and extracurricular activities. Oh, and you’re also needing to coordinate with parents.

If you add the rest of your congregation to the list, then the complexities simply increase. You have a large, scattered group of people, all of whom are busy, all of whom are getting pulled in a hundred different directions every day.

How can you possibly communicate with all of those people in a way that is reliable and won’t create an enormous amount of additional administrative work for already overworked church employees?

Text messaging is a far superior method of communicating with your congregation relative to email or Facebook or even some of the private church network softwares that is becoming increasingly common.

Why is texting better?

First, unlike Facebook and email, texting produces consistently high engagement rates. Facebook posts will only be seen by 3-5% of your Facebook followers—unless you buy ads on Facebook, that is. Emails will probably be opened by at most ⅓ of your congregants. Text messages, in contrast, will be read by 95% of the people you send them to! 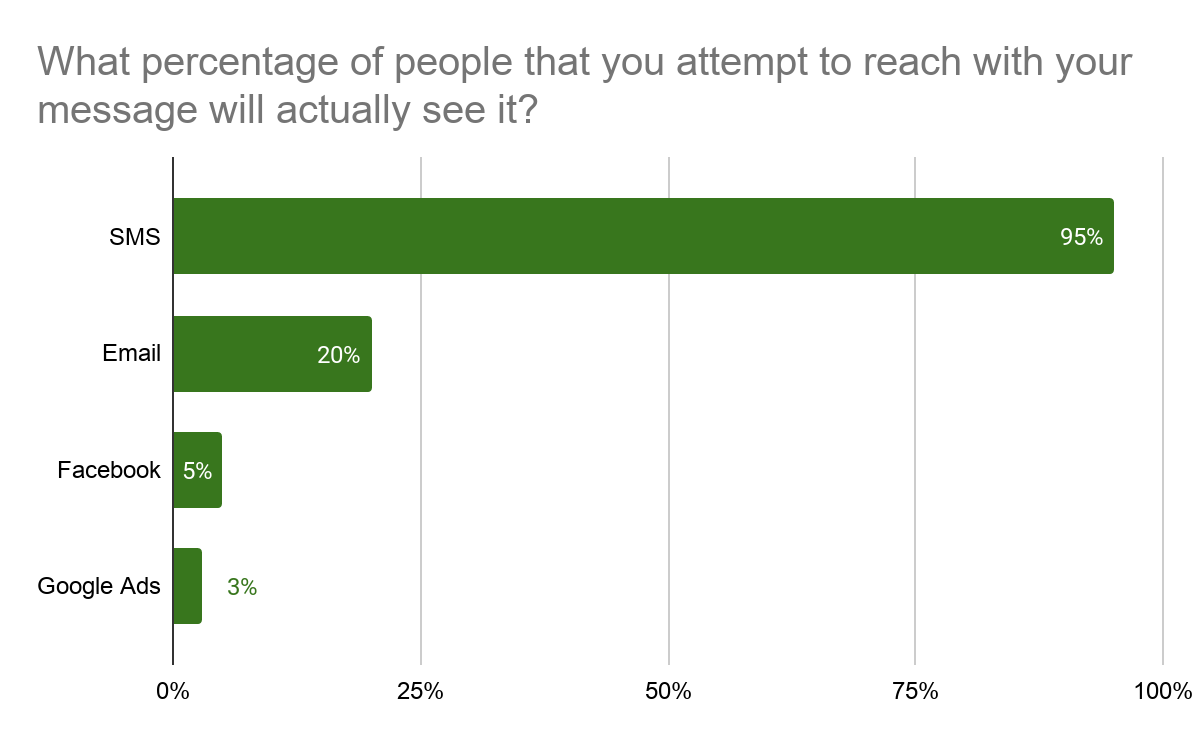 So text messaging is simply a more reliable way of communicating, compared to a Facebook page or email.

But what about the various social networking products now available to churches that allow them to create exclusive networks only for church members? Such apps do offer some benefits. However, there is one major problem: Many of your congregants won’t use the app. They’ll either not know how to use it, as is likely with older congregants, or they won’t want to add another app to their phone that they have to keep track of, as is more likely with younger church members.

In contrast to that, text messaging is incredibly easy and won’t require your church members to add any new software to their phone in order to receive messages. Everything will happen through a text messaging app, which everyone already has. And getting added to the list is as easy as… sending a text message.

To “segment” a list is to break a large list out into smaller sub-groups in order to allow for more direct communication with particular people.

In other words, with text messaging you can have one master list for your entire congregation and then as many sub-lists as you need to communicate all that is going on in the church. You can have sub-lists for your youth group, for Bible study groups, different small groups, and so on.

This all makes it substantially easier to communicate with different groups within your church.

Any tool that is going to make communication easier within your congregation needs to combine ease of use with high engagement. By that standard, there is simply nothing out there that even comes close to what SMS is able to offer.

To learn more about text messaging for churches and to get a free Mobile Text Alerts account, go here.