In the texting industry, people throw these terms around.

But what does this jargon actually mean?

And, more importantly, when and how should you use these tools for your business?

We’ll get into all of that.

But first thing’s first – What’s the difference between SMS and MMS?

What Are SMS and MMS?

An SMS is a “regular” text message.

This is a text message with no frills, just text.

No images, no videos, nothin’.

This is a text message containing media, like an image, a video, a GIF, or any other type of media.

The difference between these 2 types of messages doesn’t matter much to the average person.

But for those sending texts for their business through a texting platform such as Mobile Text Alerts, the difference is important.

You’ll need to make decisions about whether your texting campaigns should be SMS campaigns, MMS campaigns, or a mixture of both.

To help you with those decisions, let’s go over some of the advantages and disadvantages of both.

Advantages of Sending SMS for Business

Sending SMS (as opposed to MMS) has one primary advantage…

And this is a vital factor to consider. Because not utilizing SMS when you could be taking advantage of it can make a big impact to your bottom line.

Another minor advantage of using SMS as opposed to MMS would be that every mobile user has SMS capabilities. That means there will be slightly fewer delivery issues with recipients not receiving your messages.

Lastly, if a recipient happens to be on a phone plan that charges them per text (which is less and less common in the US), SMS is less expensive for them to receive as well.

So if your audience includes a lot of people without unlimited texting, they will appreciate saving money.

Disadvantages of Sending SMS for Business

Although SMS is less expensive than MMS, the obvious disadvantage is that an SMS can only contain text (and emojis).

So there’s no flexibility for graphics or videos or anything like that.

This makes SMS much more restrictive than MMS as far as the type of content you can send.

Another caveat of SMS is that it can only contain 160 characters per message. Once the content reaches more characters than that, it will split up into 2 or more messages.

Granted, most phone carriers and phones will be able to detect the message as a single unit and will still deliver it as a single message (this is called concatenation).

But there’s a chance recipients will receive the message in multiple parts – and some may even receive those parts out of order.

Not to mention, the more segments your SMS contains, the costlier it is to send the message (since it’s technically using 2 or more messages each). So that nullifies the “cheap” advantage of SMS mentioned above.

Advantages of Sending MMS for Business

As opposed to SMS, MMS has significantly more flexibility.

MMS can include many different kinds of attachments, most notably images. That gives you a lot more freedom on how you can go about your texting campaigns.

And while it’s unclear if MMS inherently yields better results than SMS, it’s commonly known that in general, content with images tends to connect with people better than text-only content.

On top of being able to include media in your text messages, MMS allows you to include more text content without splitting up as well.

As mentioned previously, an SMS can really only include 160 characters before it splits up into 2 or more messages.

So not only does MMS offer more flexibility in terms of what type of content you can include, it also gives you freedom to include more content.

And in some scenarios, this aspect of MMS can actually save you money (even though MMS typically costs more for businesses to send in general).

For example, if you have a longer message around 650 characters, it would use up 4 SMS per recipient to send that message (since it would split up into 4 parts).

However, sending the same message as an MMS may only use 3 message credits per recipient rather than 4.

So in situations like that, MMS is more cost-effective than SMS.

Disadvantages of Sending MMS for Business

Generally speaking, the main downfall of MMS is cost.

As alluded to previously, nearly all business texting providers will charge more for sending MMS than for sending SMS.

That’s because MMS costs more to send on the back end due to how the processes work and how much data is transmitted.

To put it in perspective, a typical business texting service will charge 3 times as much for an MMS as for an SMS.

One other disadvantage to consider is that MMS can sometimes bring about more delivery issues, since some phones (particularly non-smartphones) can have trouble processing them.

Though this isn’t a huge issue in the current US/Canada climate, as most users have smartphones capable of receiving MMS, it is something to be aware of.

Summary of SMS and MMS Pros and Cons

Bringing all of the above together, the summary of SMS and MMS pros and cons is as follows.

So now that you know some of the differences between SMS and MMS (and the pros and cons of each), how do you decide when to use which?

That will largely depend on your own situation – your budget, your goals, and your individual audience.

Some businesses decide that for their situation, they’ll only send MMS. Others only send SMS.

But most send a mix of both. So here are some general guidelines you can follow to help you make those decisions for your own business.

When Should You Use SMS?

Some scenarios in which you’ll want to consider using SMS would include:

When Should You Use MMS?

Some situations in which you may want to use MMS instead would include:

All of this information begs the question of how.

How can businesses actually send SMS and MMS?

After all, it’s not like you or your business’s employees can (or should) text all of your customers and prospects from your own personal phones.

How Can Businesses Send SMS and MMS? 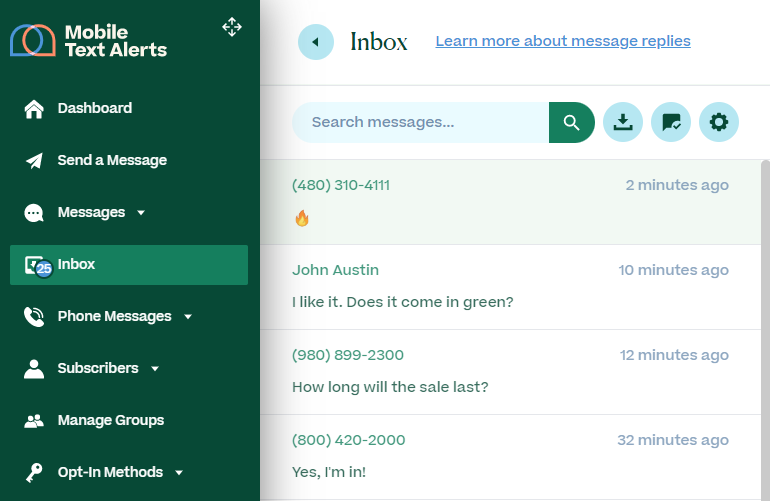 Texting platforms allow you to manage a database of contacts and send out text messages en masse.

They also provide convenient mechanisms through which you can either add people into your texting database, or your audience can subscribe themselves.

For example, a texting platform allows your prospects and customers to join your text list by sending a text to a particular phone number. Or by scanning a QR code. Or by filling out a form online.

You’re also able to set up integrations with current platforms you use, so that you can handle some of these processes automatically.

“OK, but is learning how to send messages difficult?”

It’s as simple as: 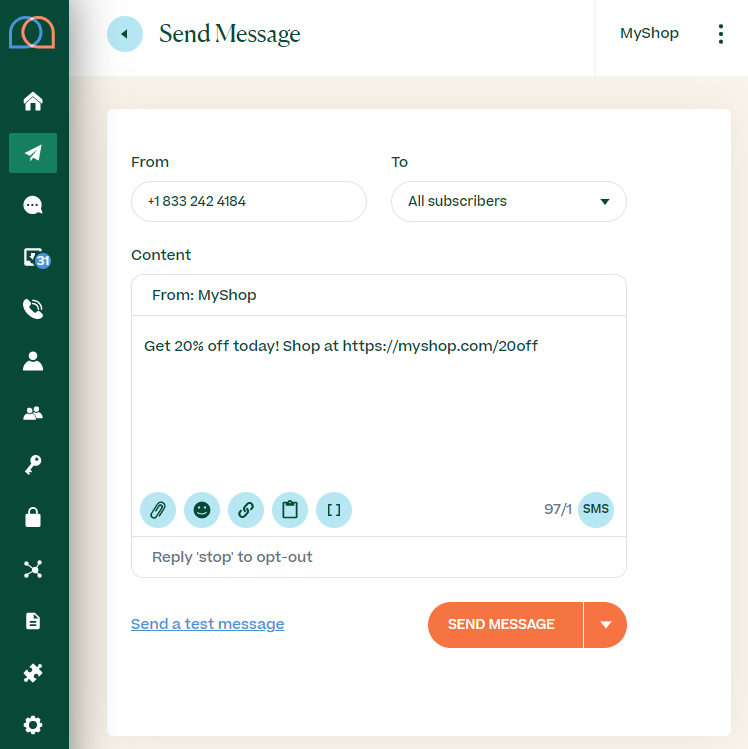 Now, there can be more to it if you want to dig deeper.

There are other possible options to explore such as:

But that’s the gist of what you need to know.

How to Send SMS and MMS for Your Own Business?

Interested in giving SMS and MMS a try for your own business?

Your first step is to just see for yourself how it works.

Get a free 14-day trial (no credit card required) and be ready to go to try it out in less than 5 minutes.